Black Rock picnic site on the banks of the Severn Estuary at Portskewett is a special place and I am indebted to our first European guests since Covid restrictions were lifted for reminding me just how special.

Brecht and Stephanie arrived from Belgium, after all the proper tests and precautions, and immediately started to explore our corner of the world with their two King Charles Spaniels Bailey and Winston.

Black Rock was one of their destinations and it prompted me to visit a couple of days later.

It sits on the edge of the Gwent Levels on the Welsh coast between the two bridges which span the Severn Estuary. For that alone it is worth a visit. It provides a unique view of the vast structures, one of which you probably drove over to get to us.

In between, depending on the state of the tide, you’ll get a sense of the power of the water here as it rushes in and out of the Rivers Severn and Wye. It is reported to be the third highest tidal rise and fall in the world. (It used to be second, but it got demoted!)

There’s a lighthouse which sits in the shallows at low tide, and it is around here that local fishermen wade out with their Lave nets to catch salmon. It’s an ancient tradition unique to this spot and demonstrated a few days a year.

The men wade out with their Y shaped frames to catch the fish on the outgoing tide and the process is captured by a magnificent wooden statue at the picnic site with a salmon leaping out of the grass in front for good measure.

But it’s not the only sculpture on display because standing on the promontory looking out across the estuary is the “Engineer” representing the men and women who built the Severn Railway Tunnel and the two bridges.

The figure is in a great position on the old slipway near the ancient ferry crossing where they have found Roman coins.  The statue stands 2.4 metres tall and is made of weathered steel with text, dates and images laser cut through the metal. The figure has no metal in the back, so sunlight passes through the holes to cast interesting shadows on the ground.

The sculpture by Rubin Eynon, is inspired by civil engineer Thomas A Walker who took charge of construction of the railway tunnel after the first of many setbacks. It was started in 1873 and was opened in 1886.

In his right hand is a model of the nearby village of Sudbrook which was built to house the tunnel workers. Sudbrook was later known for its paper mill which has long gone but nearby is evidence of the reason the mill was built there and why there is a brewery not so far away at Magor.

It’s also the reason why flooding made the building of the railway tunnel so difficult.

Incredibly the Great Spring, as it is known, runs underneath the estuary in a separate flow of pure water that is ideal for papermaking and brewing beer.

It flooded the tunnel workings on two occasions, halting construction for long periods, and has to be pumped out continually even today. The pumping station is at Sudbrook from where it is piped to the brewery.

I took the dogs for a walk in both directions along the Wales coastal path. First we walked towards the old Severn Bridge upstream and very quickly the path drops down to the Levels. It’s a wide plain next to the Estuary with pools of tidal water. When I walked it was dry, but I imagine it is normally very wet particularly after a high tide.

The path actually runs along the top of the flood defences giving a slightly elevated view with firm dry ground underneath. It is stunning and the dogs really enjoyed the space.

I retraced my steps and went the other way towards the new Prince of Wales Severn Bridge where a good path eventually leads into Sudbrook. The Victorian terraces are still in place.

If you were of a mind you could keep walking around the edge of Wales on the coastal path and down Offa’s Dyke to the same spot. It’s just over 1,000 miles.

A trip to Black Rock takes less than 20 minutes by car from Upper Glyn Farm. It is definitely worth a visit for the views, walking, history, and public art; Worth a few hours of anybody’s time.

Sometimes it takes visitors to open a local’s eyes to what is here on our doorstep.

Thank you Brecht and Stephanie. 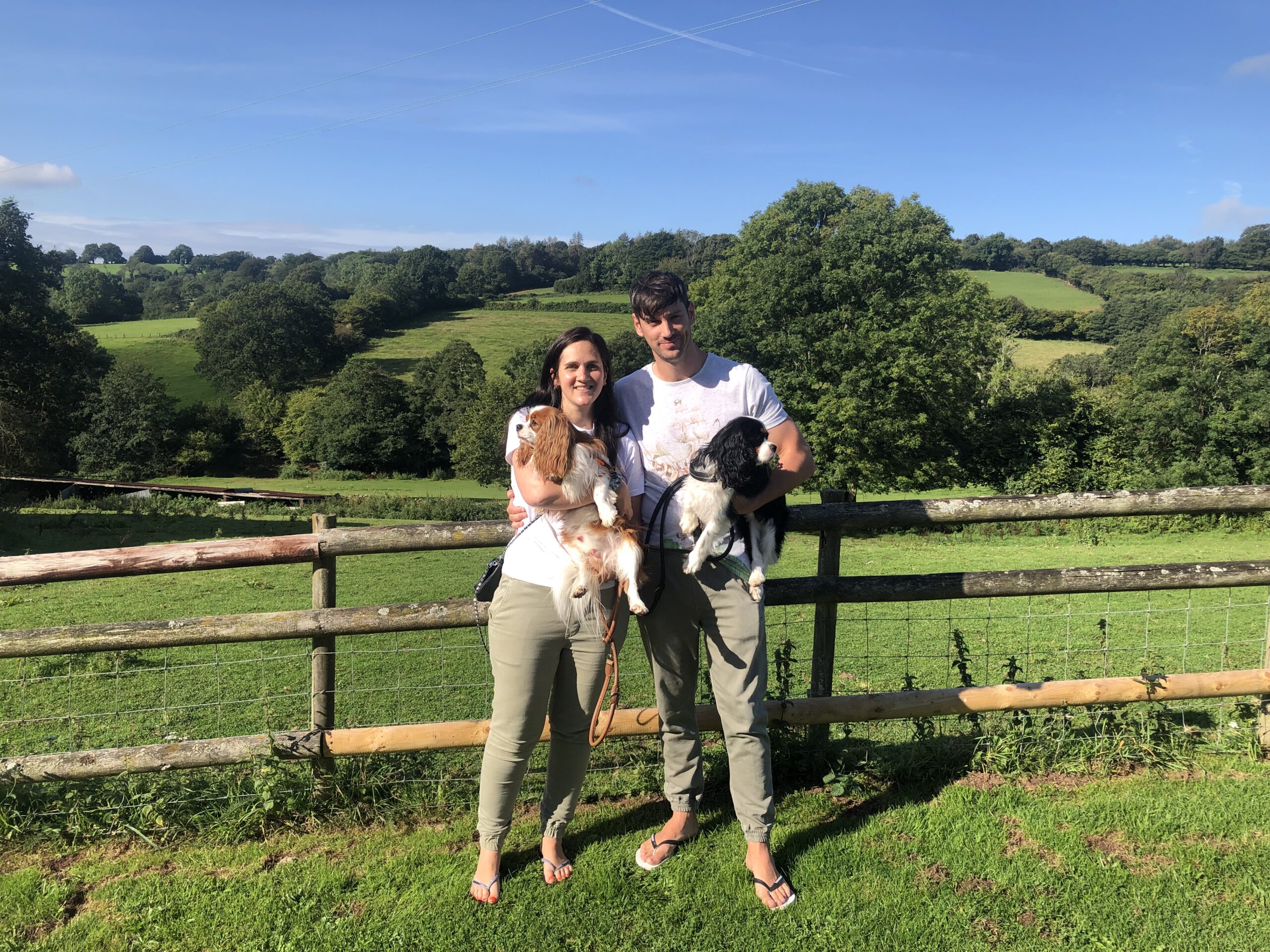 Brecht and Stephanie from Belgium with their King Charles Spaniels. Their visit to Black Rock prompted me to visit the picnic site on the banks of the Severn Estuary. 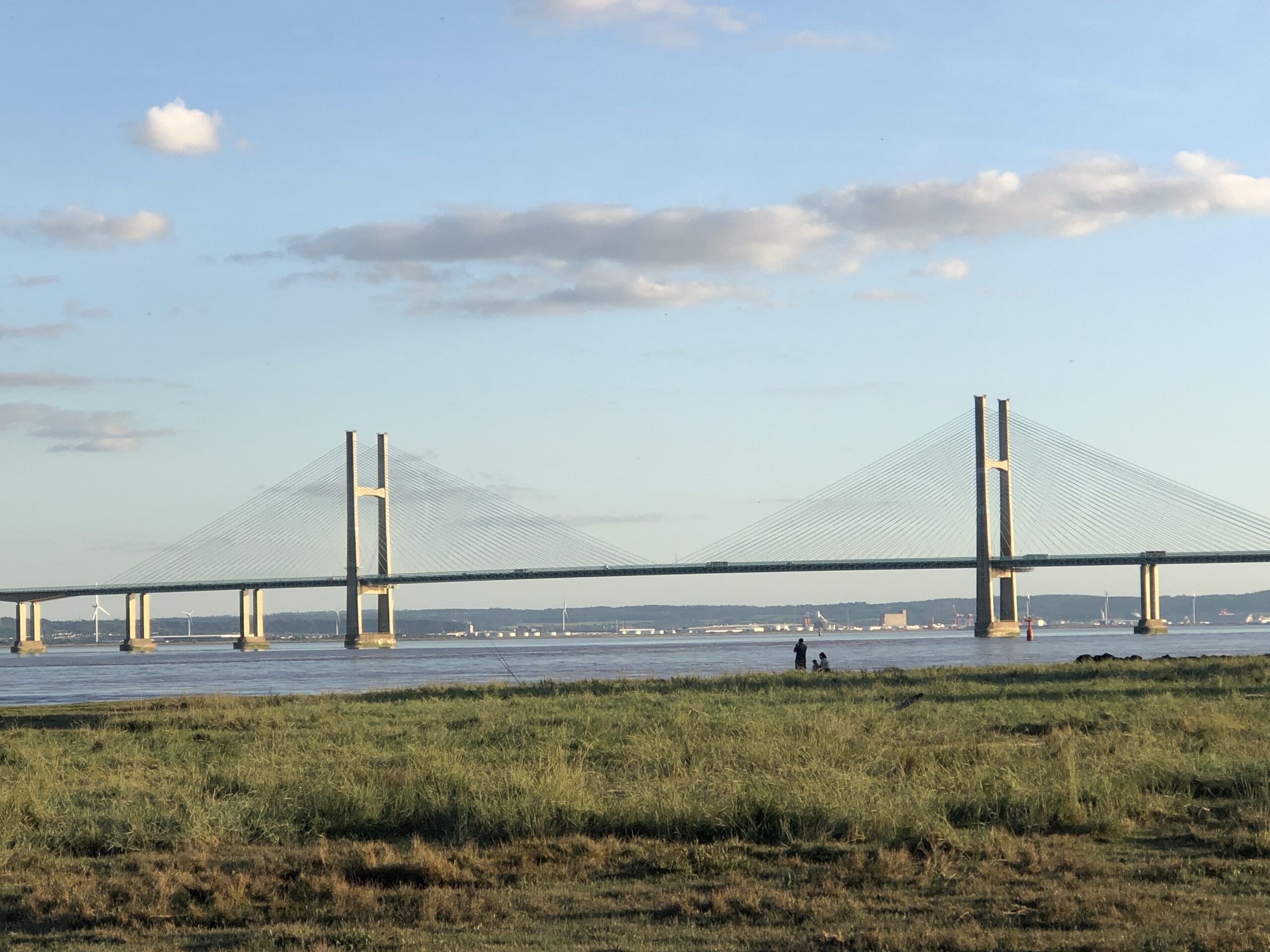 Black Rock is a great place to view the two Severn bridges. This is a section of the new, Prince of Wales bridge. 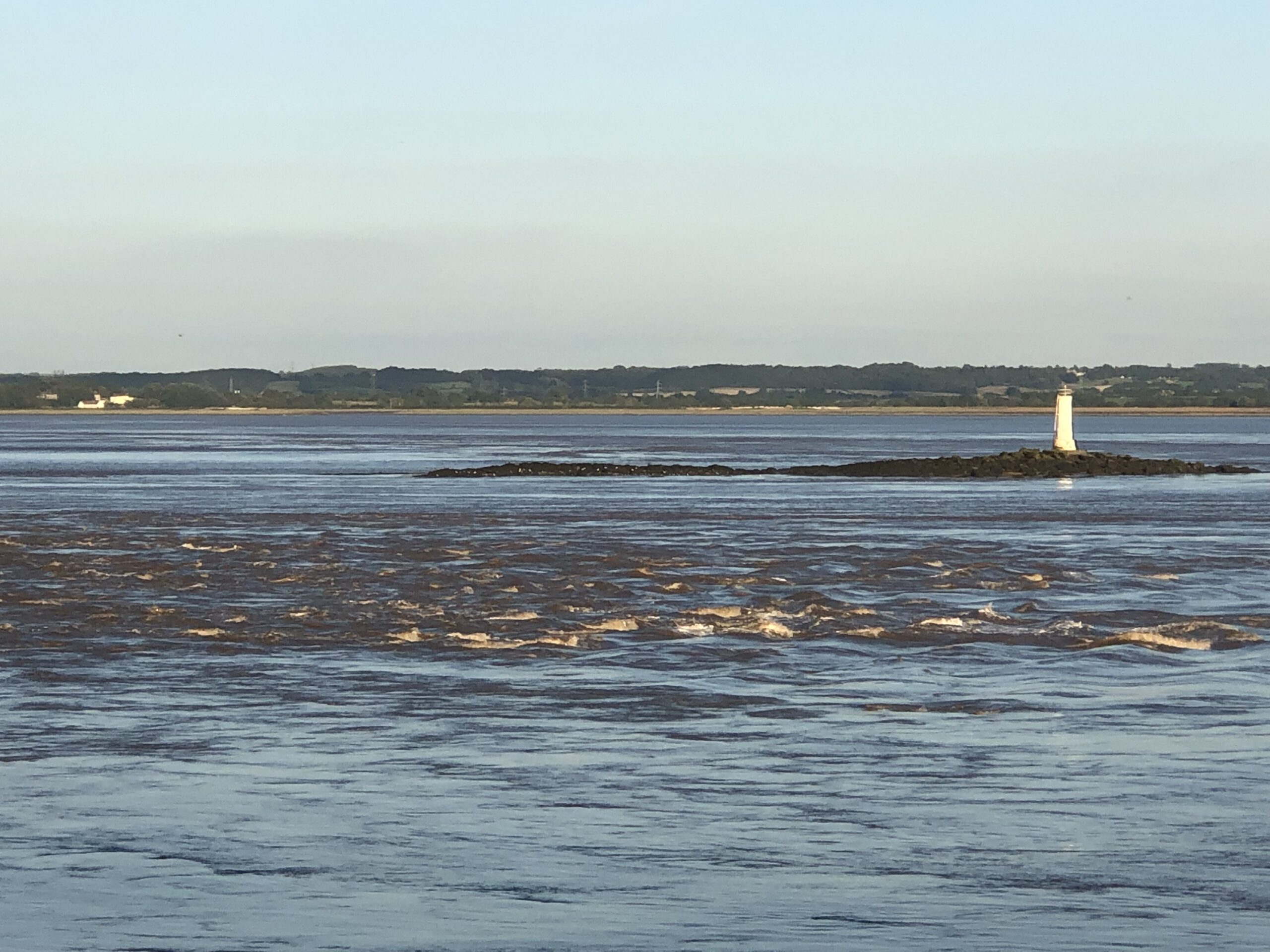 The lighthouse is close to shallows where traditionally the lave fishermen wade out to catch salmon on the out going tide. 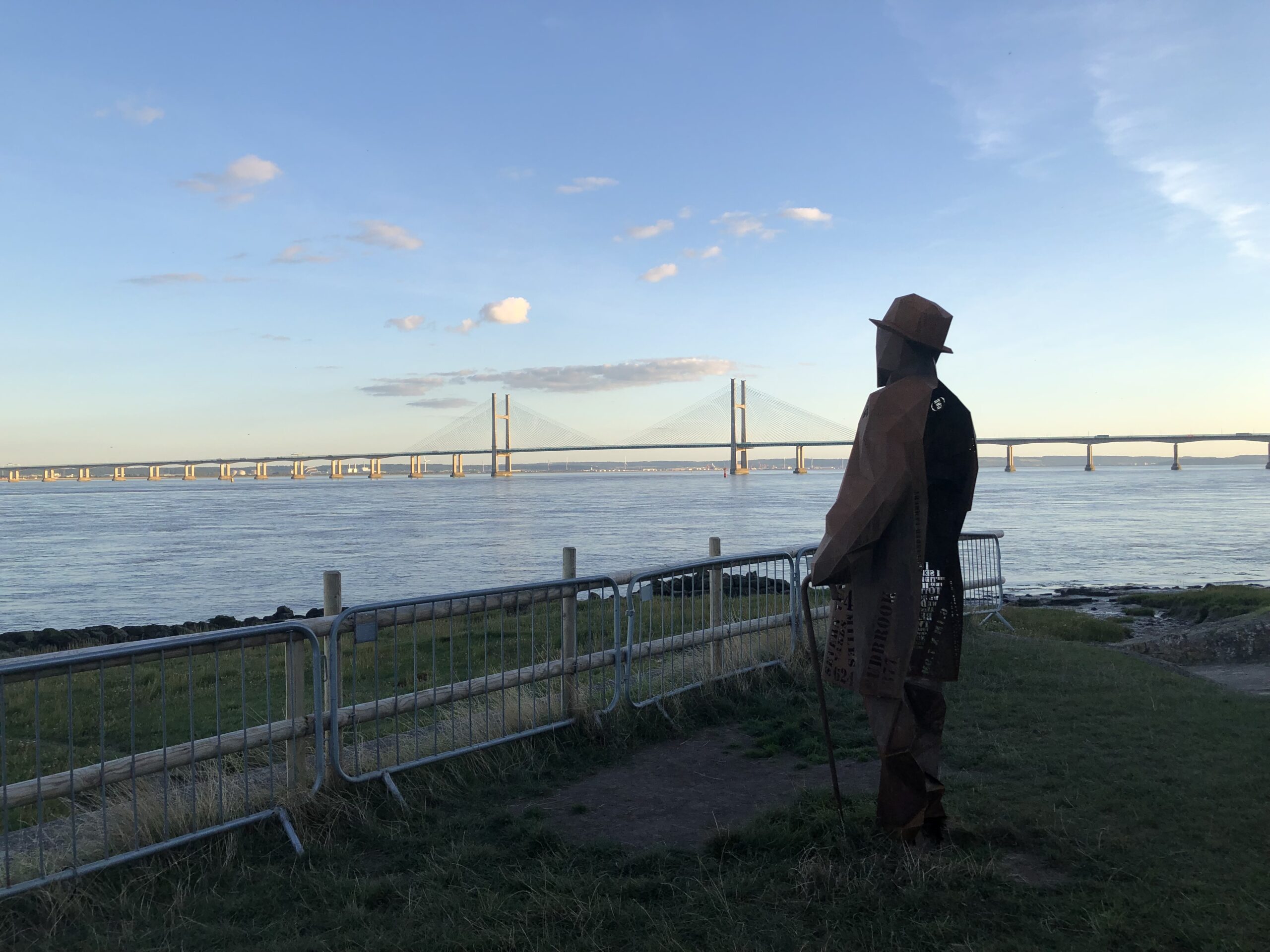 The Engineer sculpture stands watch over the estuary, the rail tunnel below and the two bridges above. 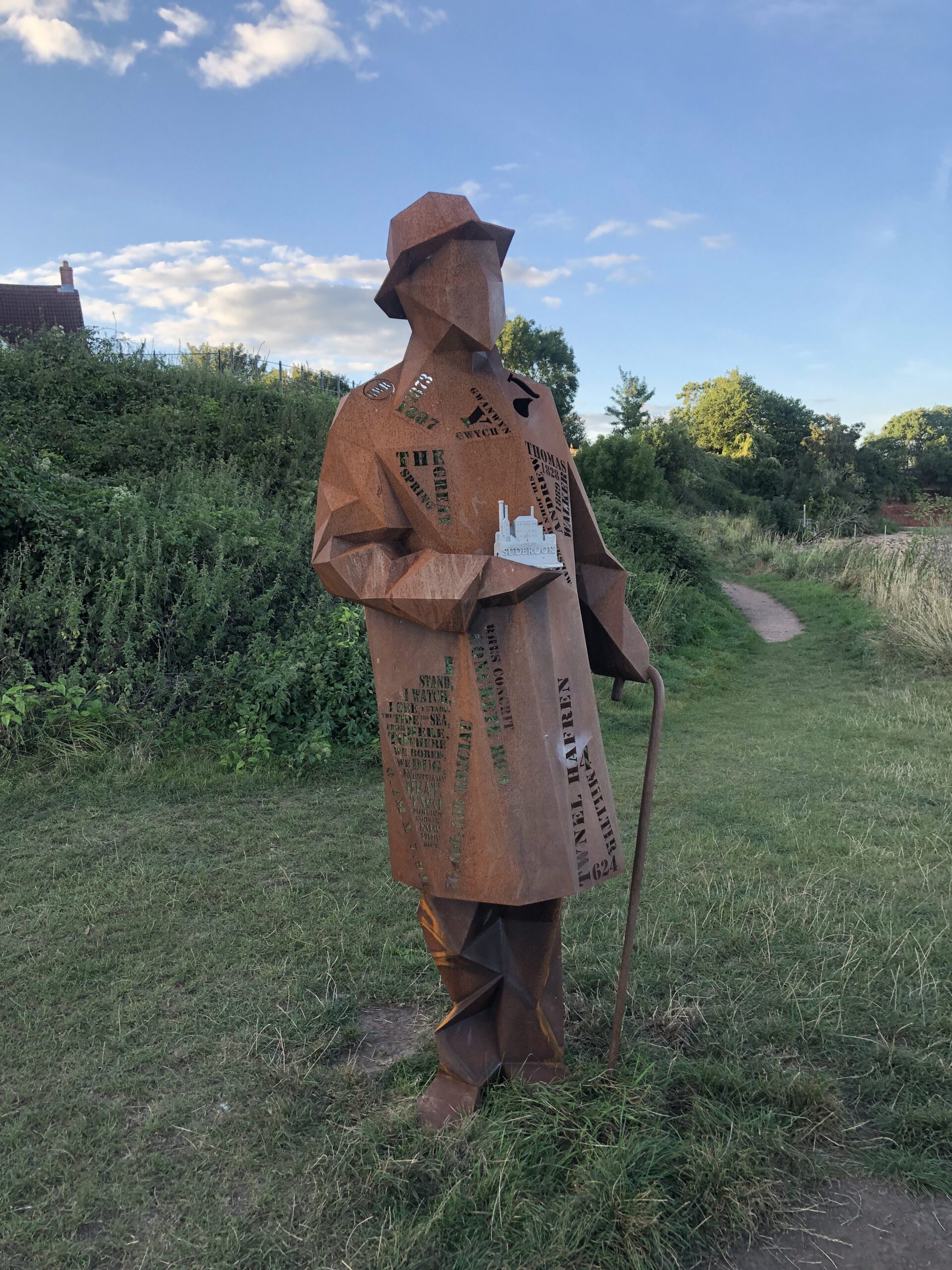 Text, dates and images​ are laser cut through his rusty metal clothing which cast interesting shadows on the ground surrounding him. 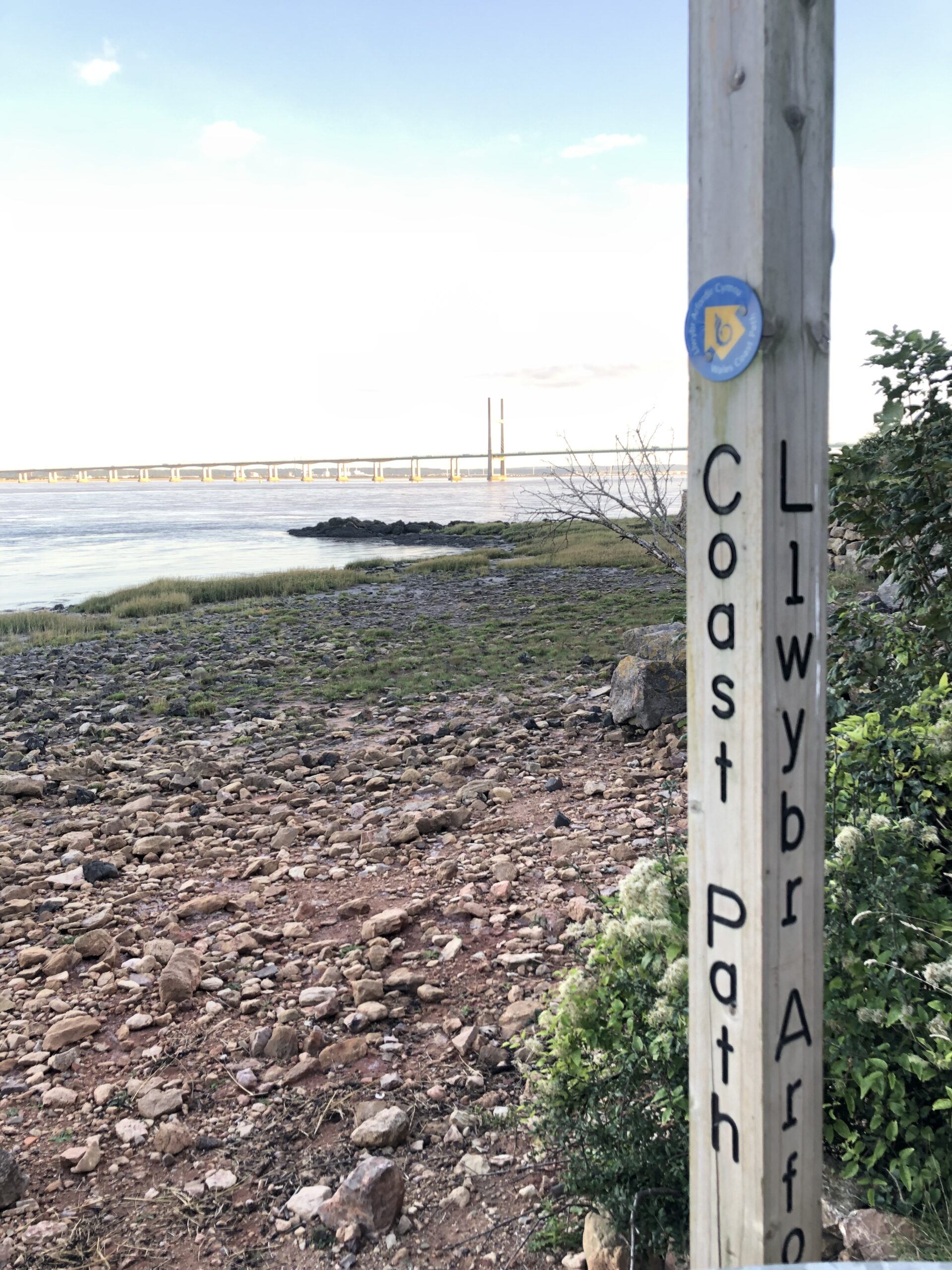 Black Rock is on the Wales coastal path. It is great for walking in either direction.