We do the Three Castles trek every year and it never disappoints. It is a triangular walk between the Norman castles of Grosmont, White Castle and Skenfrith. You can start at anyone of them and walk clockwise or anticlockwise.

On Saturday five of us set out at 8.20pm from Grosmont travelling anticlockwise towards White Castle. Parking in the main street opposite the Angel pub is easy at that time of day.

Grosmont is strategically placed above the River Monnow on the Welsh border. During the Welsh uprising in the 15th century Owain Glyndwr’s army attacked the castle but were beaten back by Henry of Monmouth who later became Henry V.

Almost immediately there’s a long steep ascent up Graig Syffyrddin (900ft) and City lawyer Rehana Loram admitted later she was questioning the wisdom of taking on the challenge. Her and husband Will had never done a walk this long (20 miles; 10 hours) but after the initial shock they settled in and finished well. The pace was easy with frequent stops to enjoy the many views, hydrate and have a snack.

The hard work of the first climb is paid off as you emerge from the woods near the top as the most spectacular panorama of the Black Mountains and Brecon Beacons is revealed. From Hay Bluff and the Cat’s Back to the Skirrid, Sugar Loaf and Blorenge it is magnificent. We even picked out Pen-y-Fan, the highest mountain in South Wales, on the distant horizon.

The route is undulating through hidden valleys lush with meadows and fields of maize. The section to White Castle is 6.5 miles (10.5KM) and took three hours ending with a climb up to the castle which stands in isolation with no village. It is the best preserved of the three.

We had an early lunch sitting on a convenient wall on the short section from the castle which is also the Offa’s Dyke path.

On the way to Skenfrith we met a party of four doing the challenge in the opposite direction.

The section from White Castle to Skenfrith used to be my least favourite because navigation was difficult, it has the most road and there were stiles in and out of every field. So, I am very happy to report that Monmouthshire County Council has done a splendid job and replaced many stiles with gates with clear directional signage. Well done Mon CC.

This is the longest section at 7 miles (11km) and we arrived in the delightful village of Skenfrith just after 3pm which was perfect because the community café opposite the castle was open for tea and cake.

What a morale boost! Homemade Victoria Sandwich and cups of tea. When you’ve been walking for the best part of 7 hours nothing tastes better and even more pleased to support this café because proceeds go to community projects. Big thanks to the lovely couple who served us.

As well as the castle the village’s 13th century church is a gem dedicated to the Irish saint, Bridget.

And so, to the final leg which is the shortest at 5.5 miles (9km). Its also my favourite section including the climb up and over the hill we started on which is blessed with a view overlooking Grosmont which cascades down the slope opposite.

As our trek approached the ten-hour mark, we climbed the steep road up into the village for a very well-earned drink at the Angel pub. Several of us enjoyed a local cider before tucking into a hearty pie while our dogs slept contently at our feet.

Top day all round and I am delighted to have shared it with Rehana, Will, John and Clive. Well done everyone for completing in 10 hours and 3 minutes. The official guide claims the journey is 19 miles but we recorded it at 20.5 miles.

If you fancy tackling the Three Castles or one of many other routes in marvellous Monmouthshire, Wye Valley, Black Mountains or Brecon Beacons, just let me know and I’ll design something for you to suit your fitness, mobility and interest. 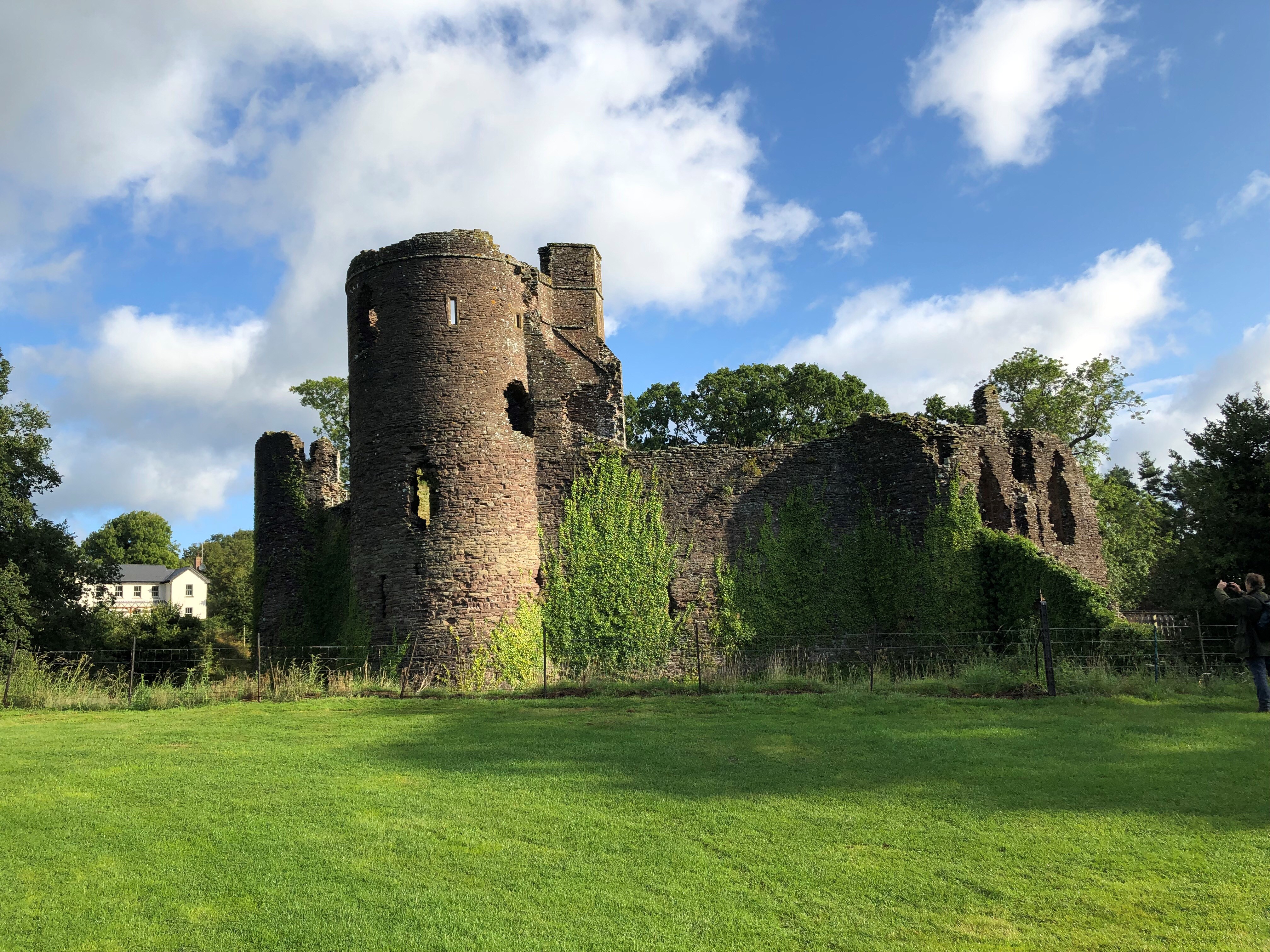 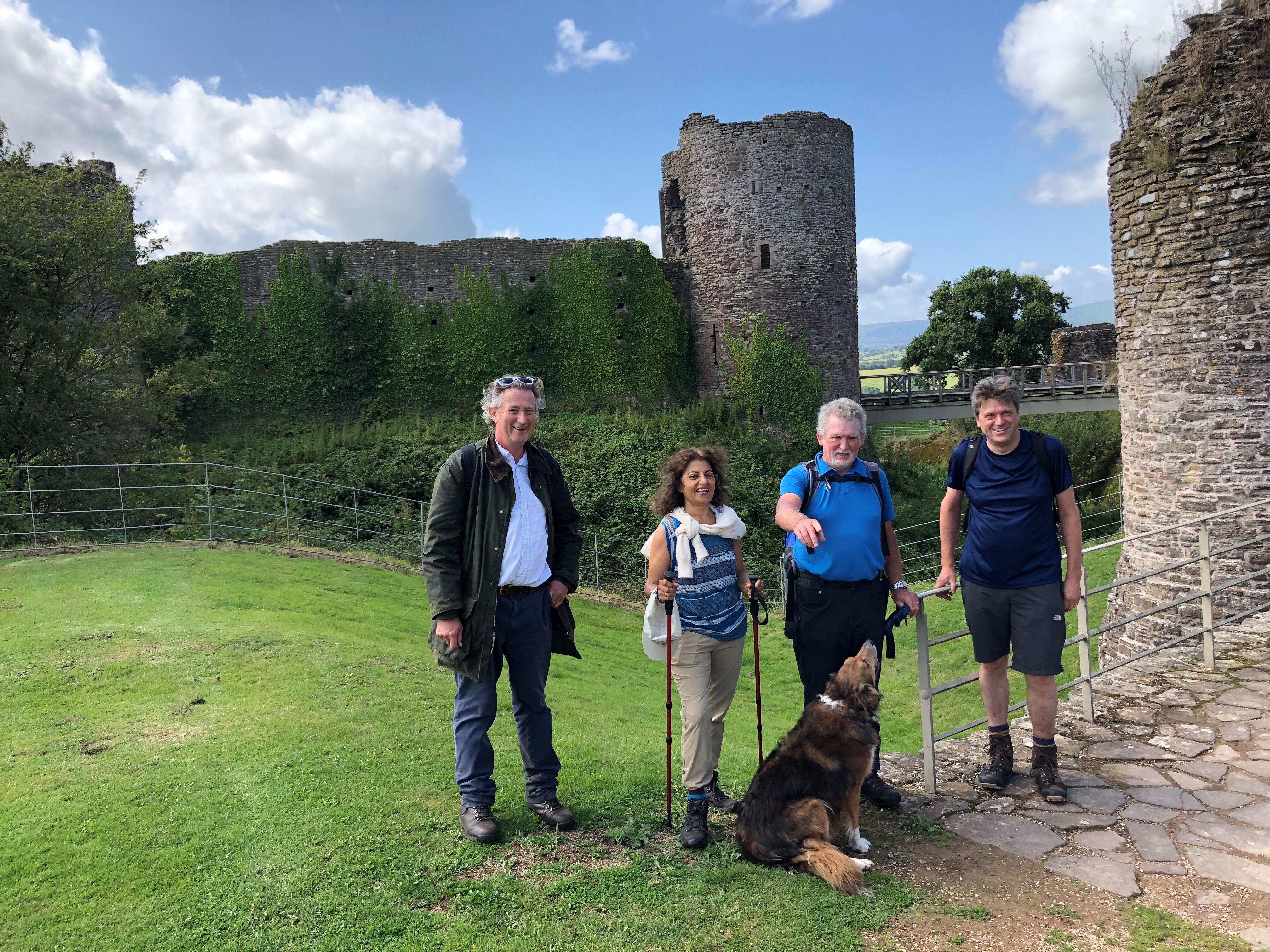 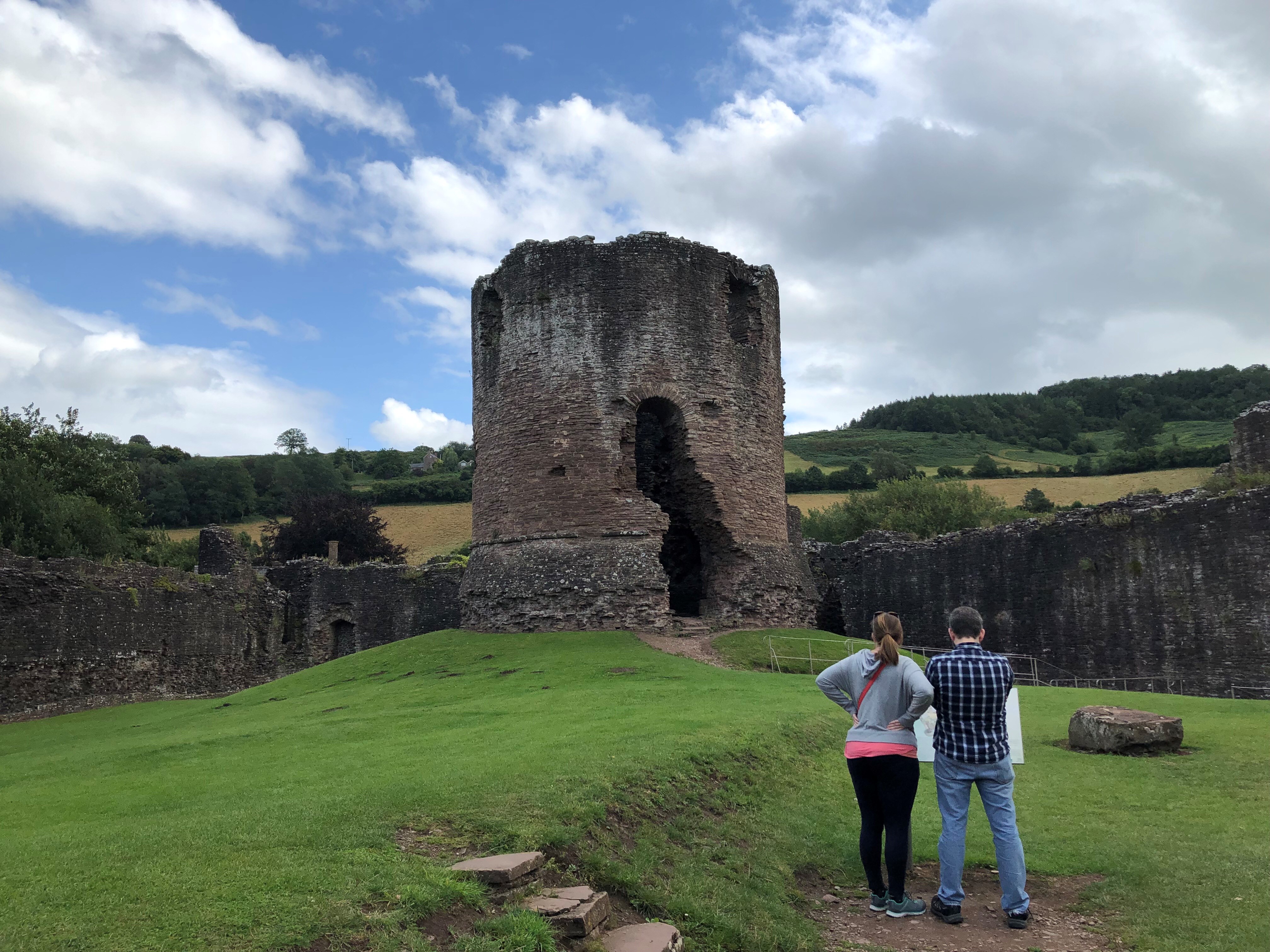 City lawyer Rehana proving you can have your cake and eat it! 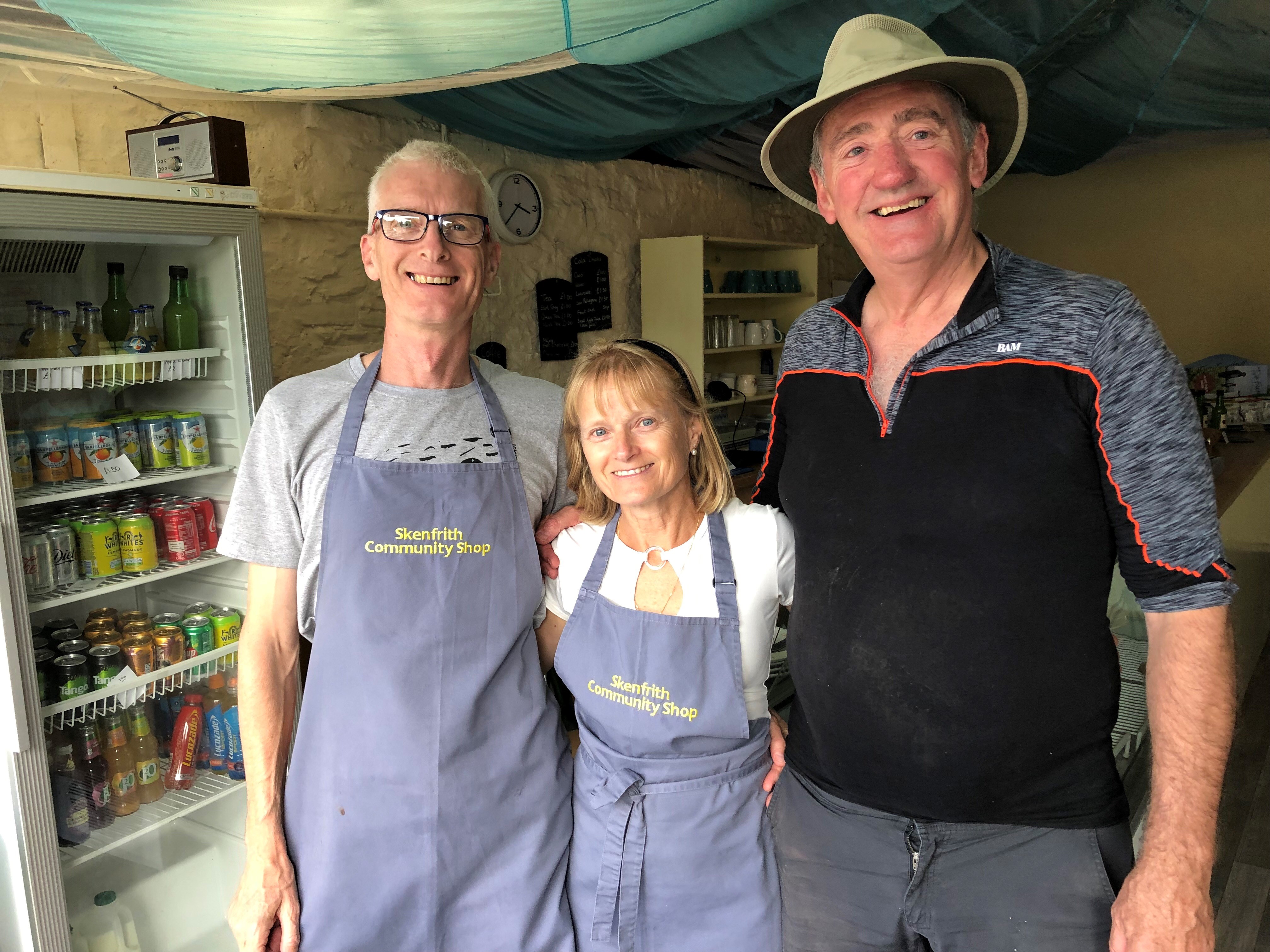 A warm welcome at Skenfrith Community Shop, which is run by local volunteers 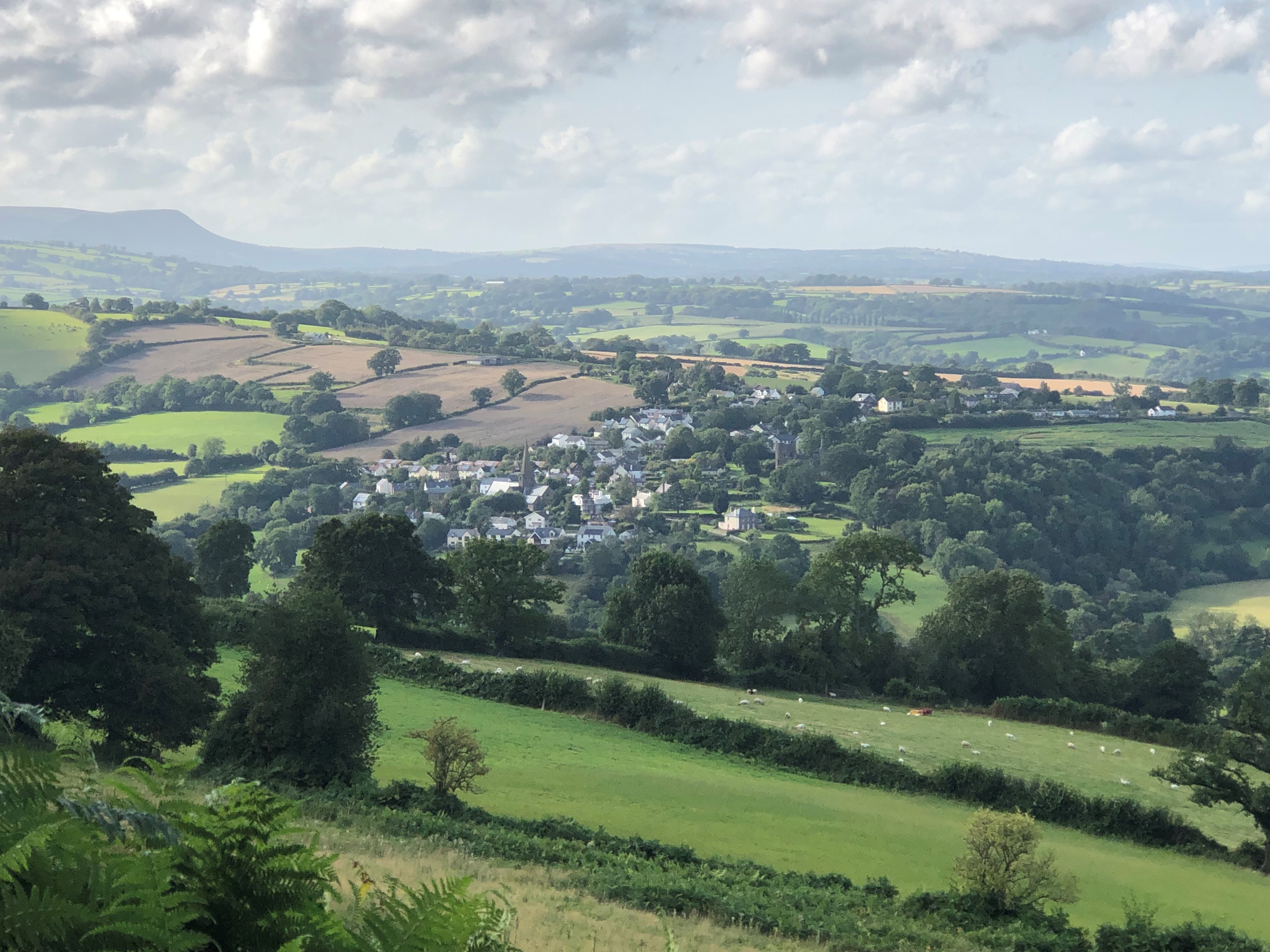