On the 6th July 1942 during WWII, a Wellington Bomber crashed into a mountainside in the Brecon Beacons killing its five Canadian crew.

I’d heard about the memorial that had been erected at the site and on Sunday we visited. What I wasn’t expecting after all these years were two piles of wreckage near the cairn with its plaque marking the spot and naming the men who perished.

We started from Blaen-y-Glyn car park beyond Talybont reservoir on the most perfect crisp, clear and sunny January day. The morning light was streaming through the woods as we dropped to a small valley and then climbed beside a fabulous cascade of waterfalls.

The climb up is steep and across rough ground, but we eventually made it to an established path which climbed gently and then very steeply to the top of the Cwar y Gigfran ridge where there is a cairn and convenient outcrop of rock to sit on and enjoy the view.

From there we travelled north west along the ridge looking for the memorial below as Pen-y-Fan, the highest mountain in Southern Britain, and Corn Du peaked over the ridge on the other side.

Towards the end of the ridge we saw it and followed a path down. It is a beautiful place for such a tragic event to have taken place. The sight of two piles of twisted wreckage from the plane made the view even more poignant.

Poppies and wreaths adorn the site around the wreckage and the memorial with the names of the pilot F/Sgt Kemp and his crew F/Sgt Mittel, Sgt Beatty, Sgt Hayes and Sgt Yuill. I wonder if their families have ever visited.

After a moment of reflection, we followed a well-worn path to the Graig Fan Las ridge and followed it back to the car park down the sharp descent we climbed last week.

The weather remained fantastic and I’d never seen so many people out on the ridge or the climb.

Two young couples stopped us at one point and asked the way to Fan y Big. We couldn’t believe they had come into the mountains without a map! They said they were training for the Welsh Three Peaks challenge which didn’t fill us with a lot of confidence. Anyway, the visibility could not have been better, so I suppose they were OK on this occasion.

The customary stop in the Bear Hotel at Crickhowell provided yet another fine meal. I love the place and its welcome. 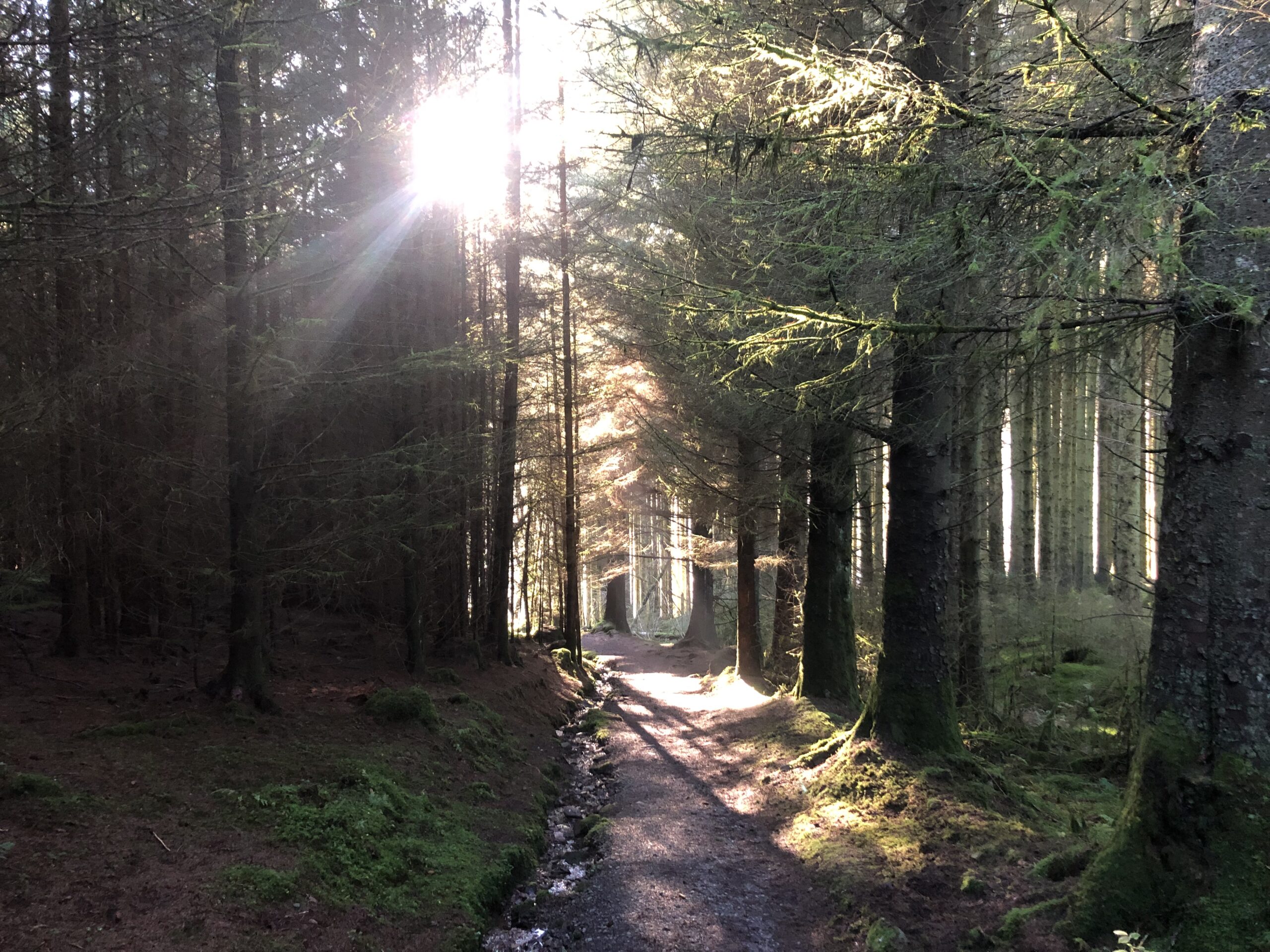 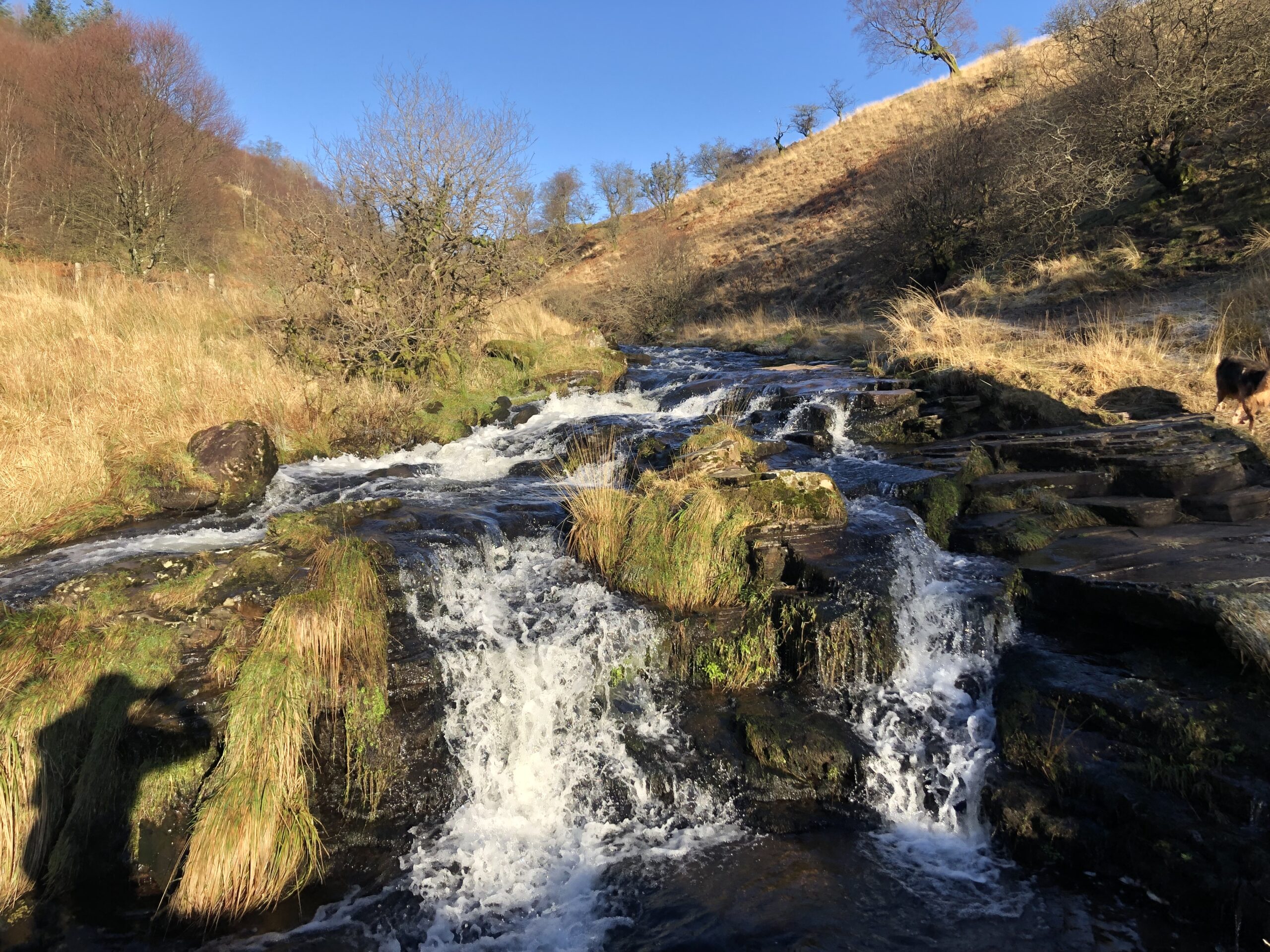 A cascade of waterfalls 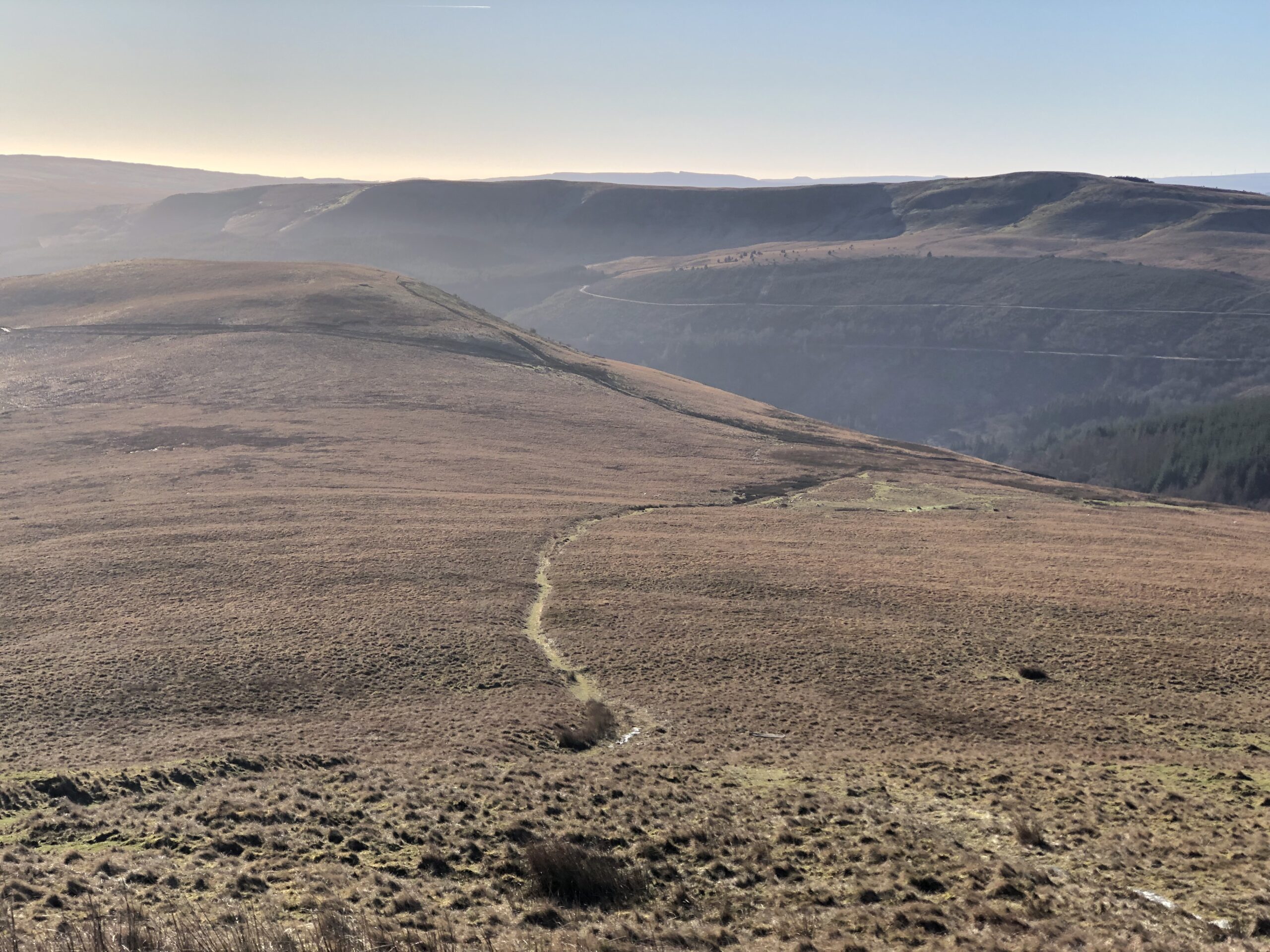 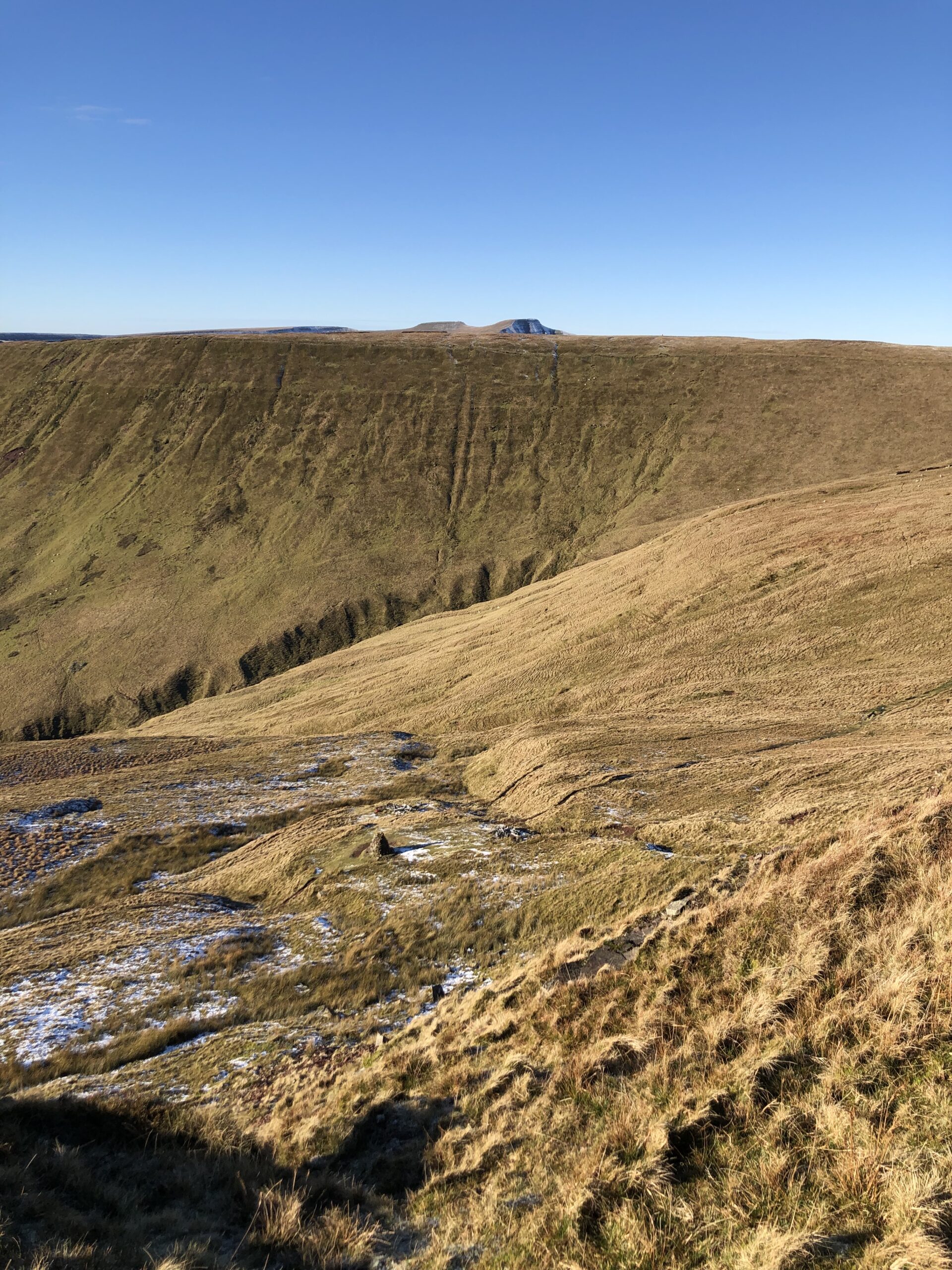 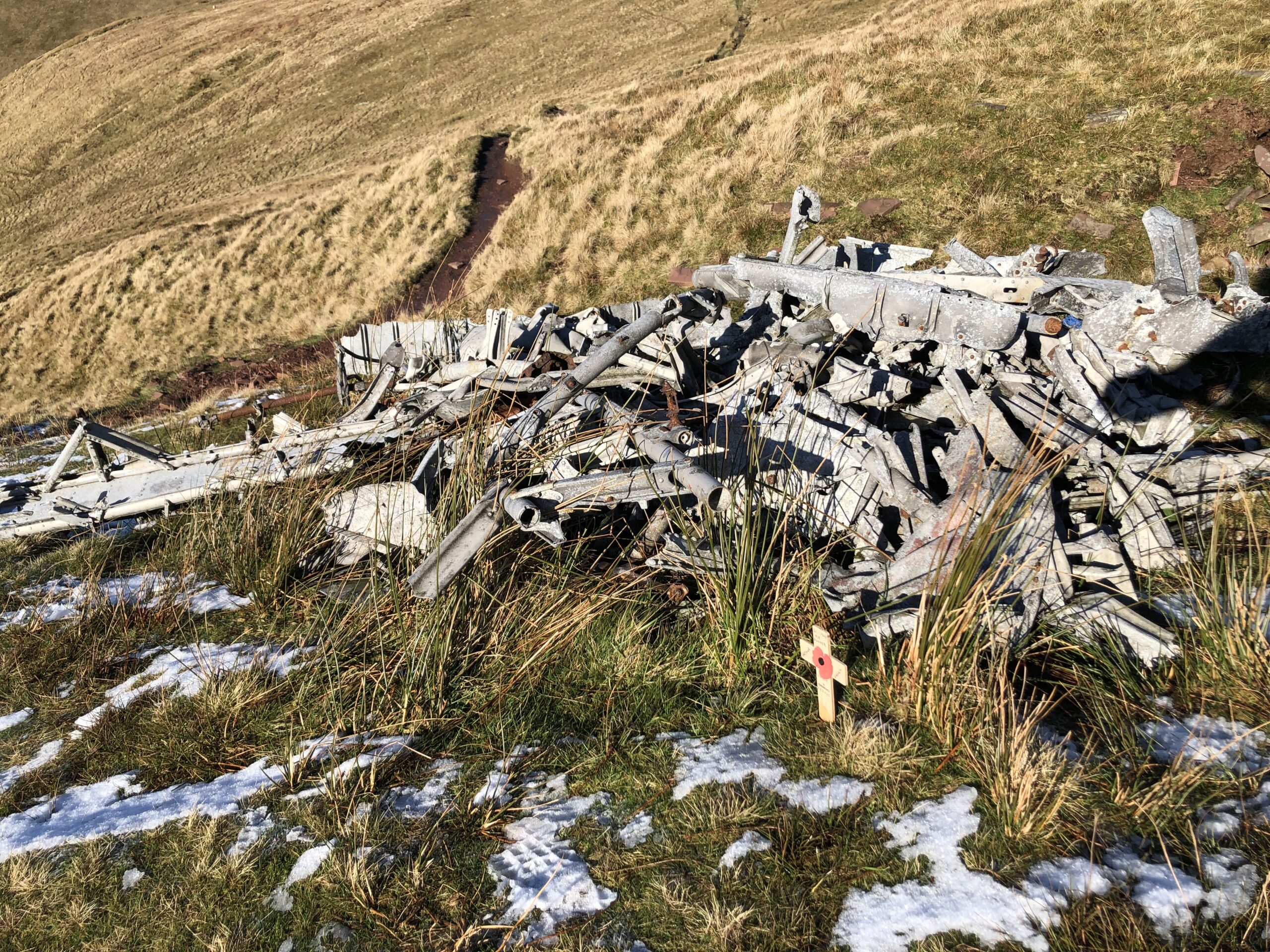 The wreckage is close by in two piles 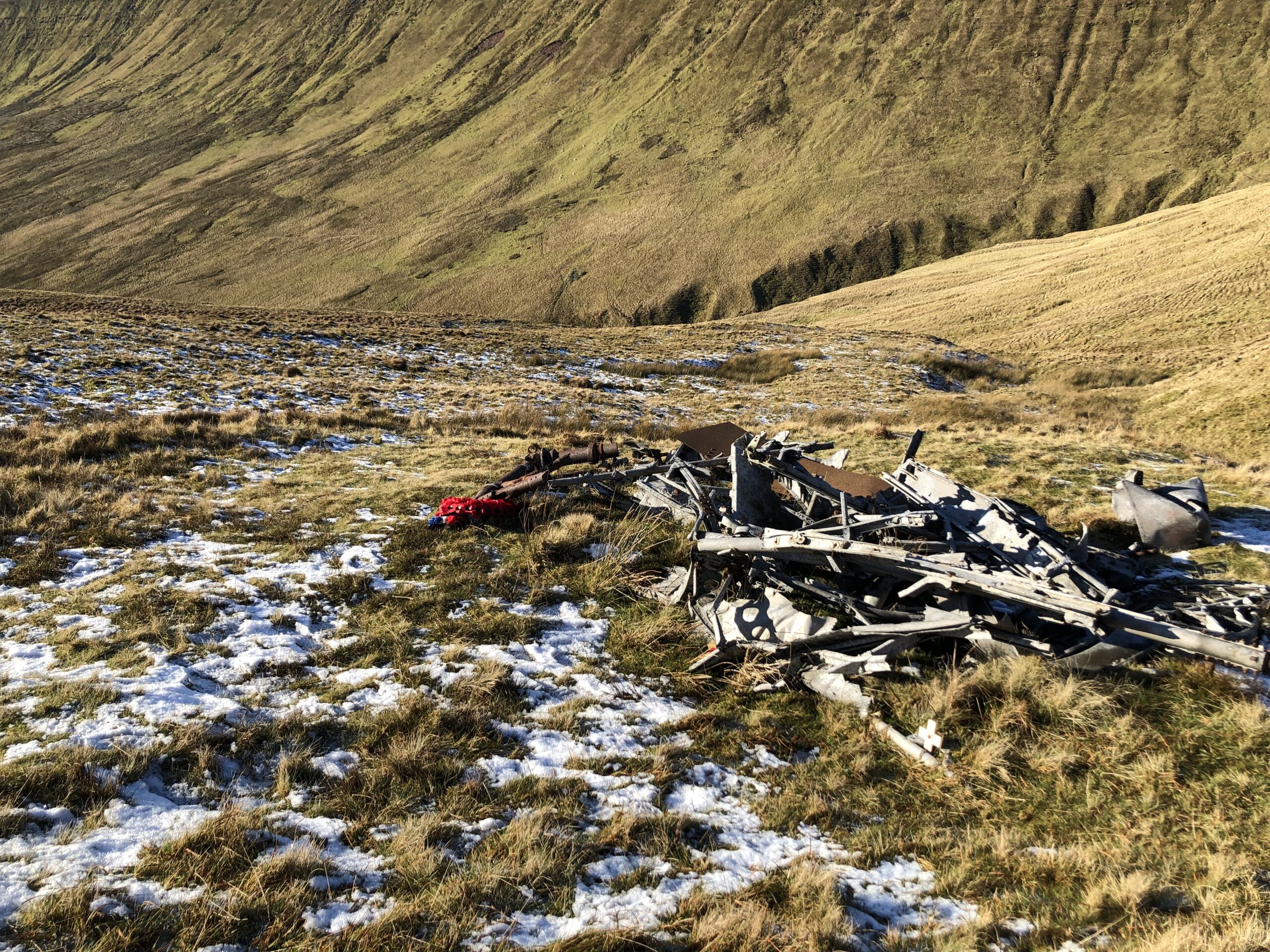 A second heap of wreckage is below